Address by Director of Centre

Address by Director of Centre

The Centre for Chinese History and Culture (CCHC)
University of Macau 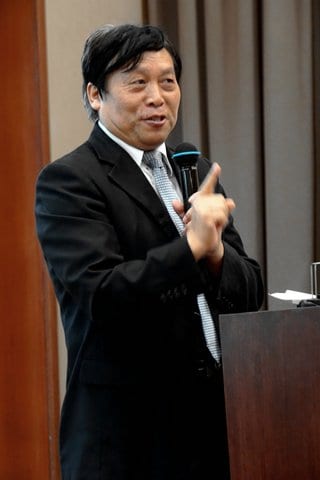 Address by Director of Centre for Chinese History and Culture, Prof. ZHU Shoutong

For the purpose of deepening identification and understanding of school students toward Chinese history and culture, CCHC intends to establish promotion bases in Macao’s elementary and middle schools by telling stories of Macao and spreading Chinese history and culture, which would manifest the historical origin and power vitality of “One Country, Two Systems” strategy. Moreover, CCHC also cooperate with cultural associations of Macao to carry out activities concerning Chinese culture, arts and studies; by grasping the opportunity of building “One Centre and One Platform” in Macao and actively involving itself in the great national concept of “One Belt, One Road”, establishing itself as the forerunner to promote Chinese History and Culture in overseas, especially in Portuguese-speaking countries.

Through much efforts in drawing on strength of academic and research advantages of UM and full collaboration with Tsinghua University and East China Normal University, CCHC would mobilize excellent faculty members to offer Master course in Chinese history and culture; in that case, CCHC is to become the important base for the cultivation of instructors in the aspect of Chinese History and Culture and related desirable talents in history education in local schools. The sense of ethnic identification of target audience would be strengthened after the compiling work of history and Chinese teaching references by experts and the organization of activities like “CCHC lectures series”.

Meanwhile, CCHC is the research base of Chinese History and Culture, which focuses are on relationship between culture and comparative research in China and the world. The Centre regularly organizes high-level Chinese cultural forums with externally and internally important cultural associations in the world and Macao to contribute to the promotion of traditional culture and the development of new Chinese culture.    The intercultural pattern having existed since port-opening of Macao helps provide not only academic research with a broad view and peculiar perspective, but also the study, publicity and promotion of Chinese history and culture with the resource privilege. Accordingly, after its establishment, CCHC has held large-scale cultural seminar series and applied our influences in the aspect of history and culture to assisting in the differentiation of the relationship between Macao culture and other cultures for Macao residents; by virtue of reserving precious spiritual resources in local culture and transforming corresponding research results into historical wisdom, CCHC is engaged in endowing traditional Chinese history and culture with modern features.

Currently, the concept of “One Belt, One Road” becomes the significant blueprint of the great rejuvenation of the Chinese nation; the construction of Guangdong-Hong Kong-Macao Bay Area is in full swing. CCHC of University of Macau will jointly cooperate with Macao Base for Primary & Secondary Education of Humanities *Social Sciences strive for creating more chances for local youngsters to access and learn from splendid traditional Chinese history and culture; in this way, youth in Macao could comprehensively understand both Macao and traditional Chinese cultures, foster an attitude of courage to assume great historical responsibilities, exert self advantages fully, and contribute to his ingenuity and strength for the great rejuvenation of the Chinese nation.