“2021 New Year Calligraphy Competition in Hong Kong and Macau”, organized by the Calligraphy Education Research Association of Macau and co-organized by the Centre for Chinese History and Culture (CCHC) at the University of Macau (UM), was held at the Exhibition and Multifunction Hall at the Cultural Building (E34-G016) at the UM  from 23 June to 30 June. Meanwhile, the award ceremony for this competition was held on 23 June in the E34 lobby. Winners attended the ceremony and received their certificates. The award presentation ceremony attracted more than a hundred students, teachers, and parents to participate.

Prof. Zhu Shoutong, the Director of the CCHC, quoted “national writing itself is art, which is remarkable” in his speech. Combined with the saying “respect the clothes first, then the people”, he added a little twist and pointed out that we shall “respect the words first, then the people”. This saying showed that calligraphy indeed brings an influence on people and society, and also indicated the relationship between calligraphy and Chinese culture and its importance. Finally, Prof. Zhu stated that Macao’s society pays great attention to calligraphy education. Not only schools but also many associations in the society also pay attention to the development of calligraphy in Macao and support the education and popularization of calligraphy through various activities. 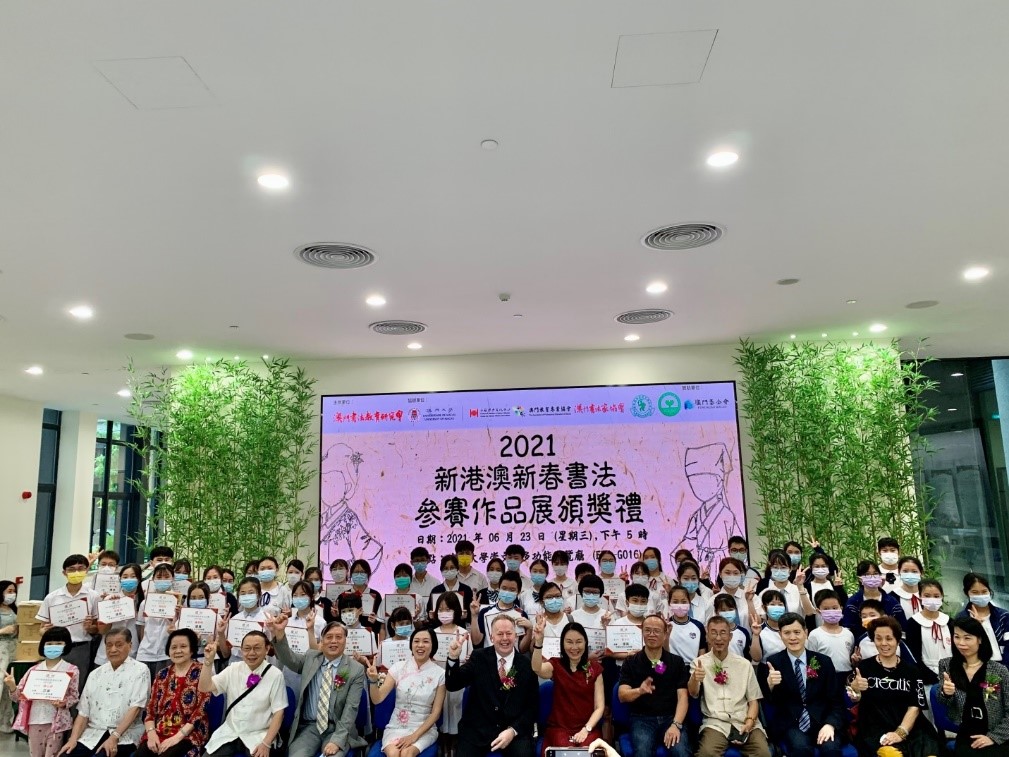 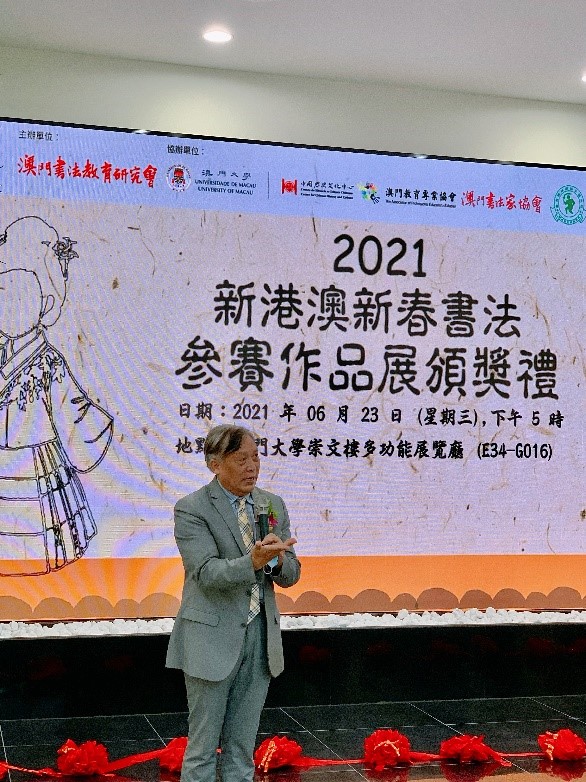 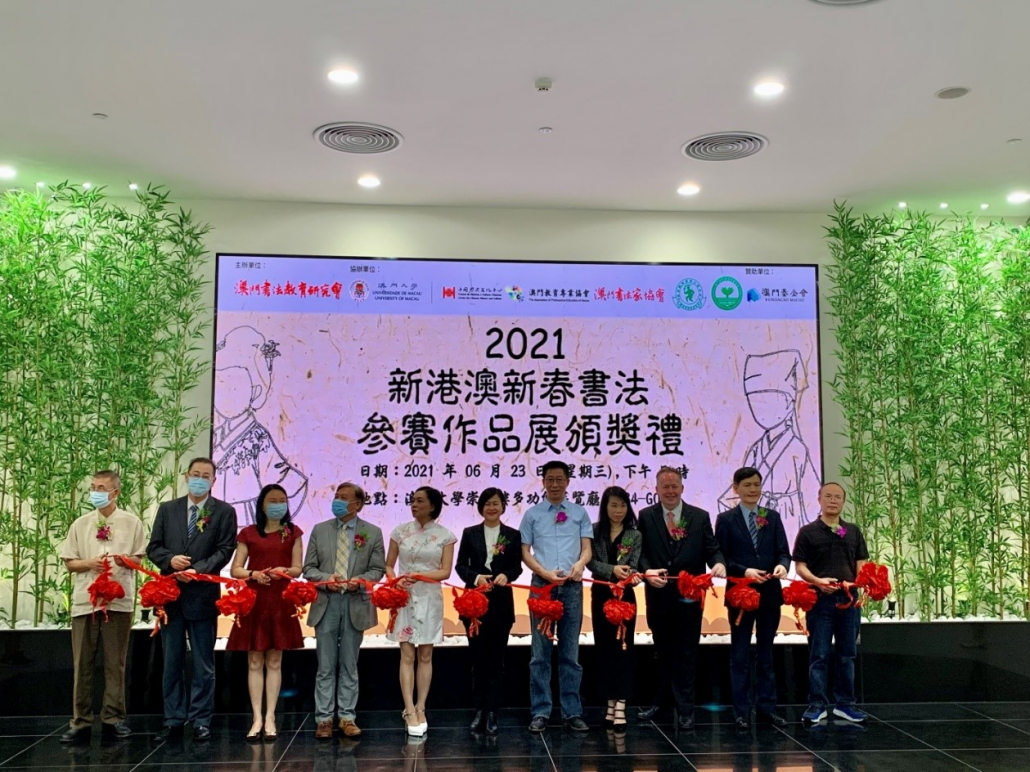 With the aim of “enhancing teenagers’ interest and attainments in calligraphy”, the competition was divided into senior secondary school, junior secondary school, junior primary school, junior primary school, and open groups, with approximately 600 participants. This competition provided a chance for young people from Singapore, Hong Kong, and Macao to use calligraphy, the quintessence of Chinese culture, to write Spring Festival couplets in combination with traditional Spring Festival activities when Chinese New Year approached. This could help to show the Chinese cultural temperament of the young people of the three places, and promote the excellent Chinese culture at the same time. 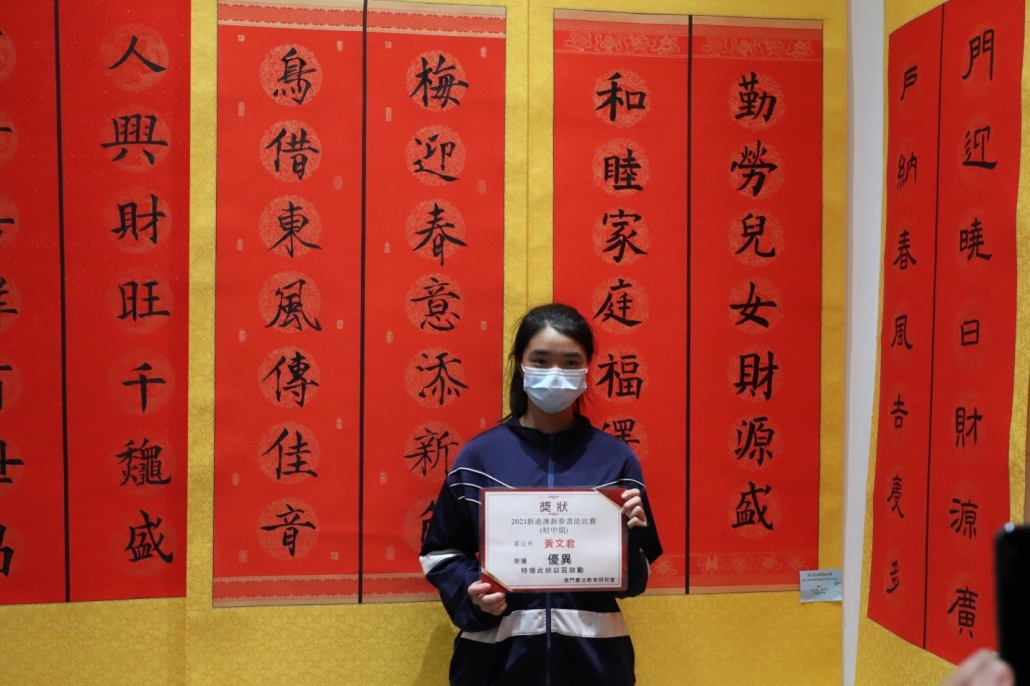 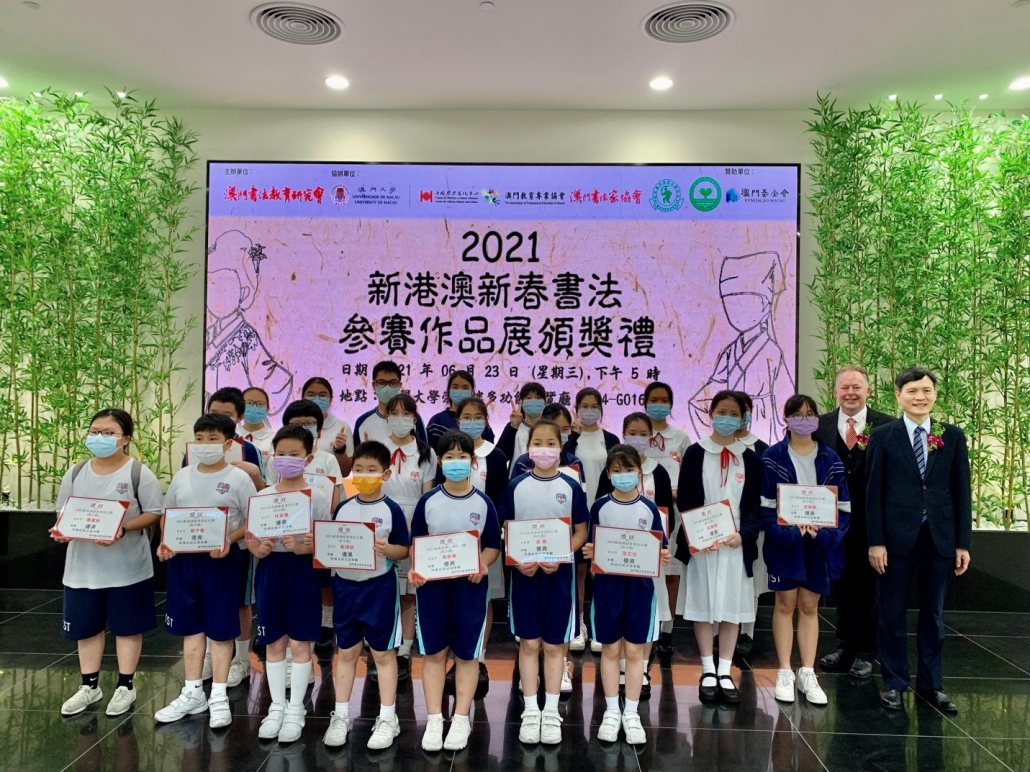 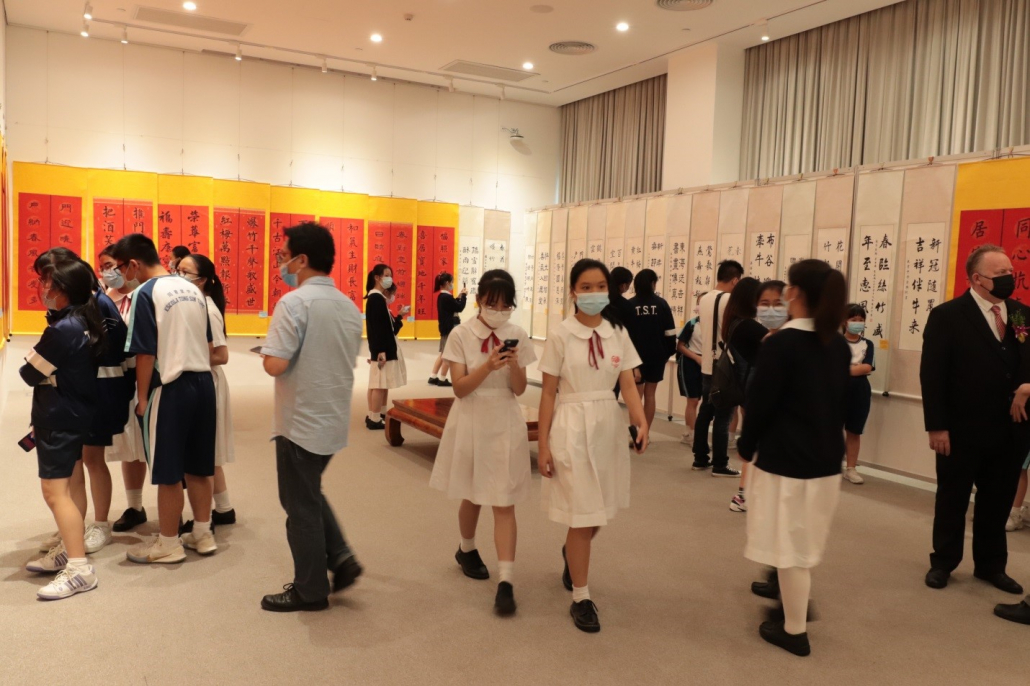 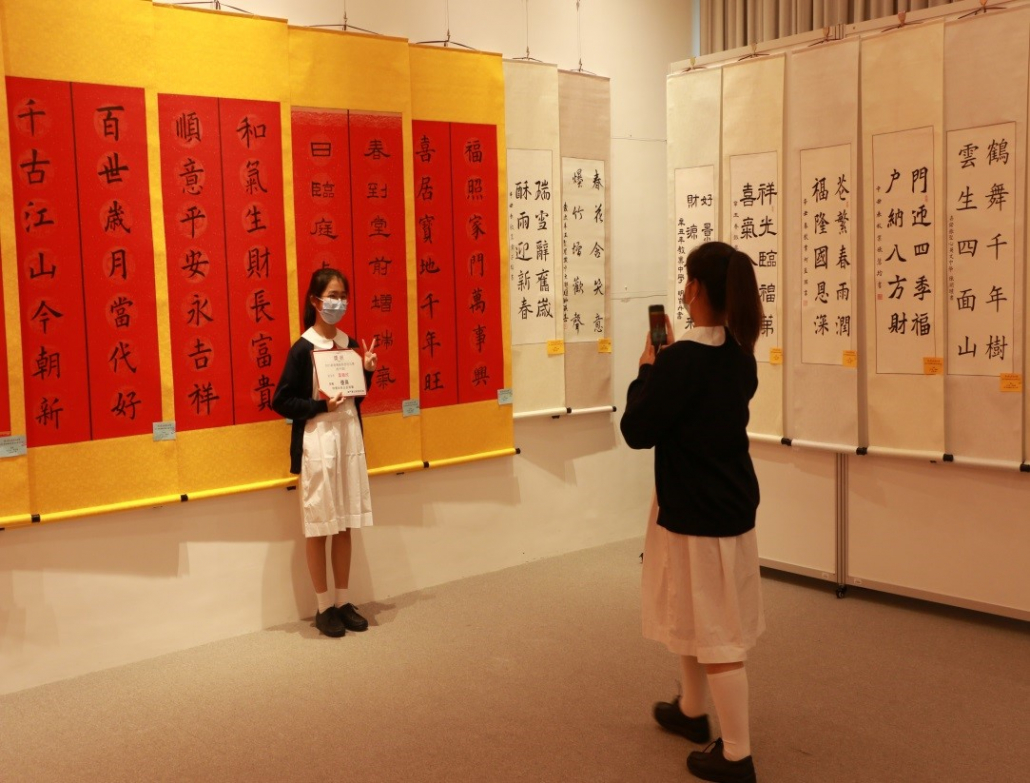 On June 18, 2021, at 4:30 p.m., the Centre for Chinese History and Culture of the University of Macau held the second lecture on the theme of “Multicultural Study Activity in Macao — Father Matteo Ricci and Chinese Culture” through the online Zoom platform. Professor Ye Nong, the director of the Centre for Hong Kong and Macau History and Culture of the Jinan University and the Institute of Chinese Cultural and Historical Records of the Jinan University, was invited to give the lecture. Dozens of students from Colégio Mateus Ricci participated in this study activity. This activity mainly divided into three parts, including lecture, study and sharing. 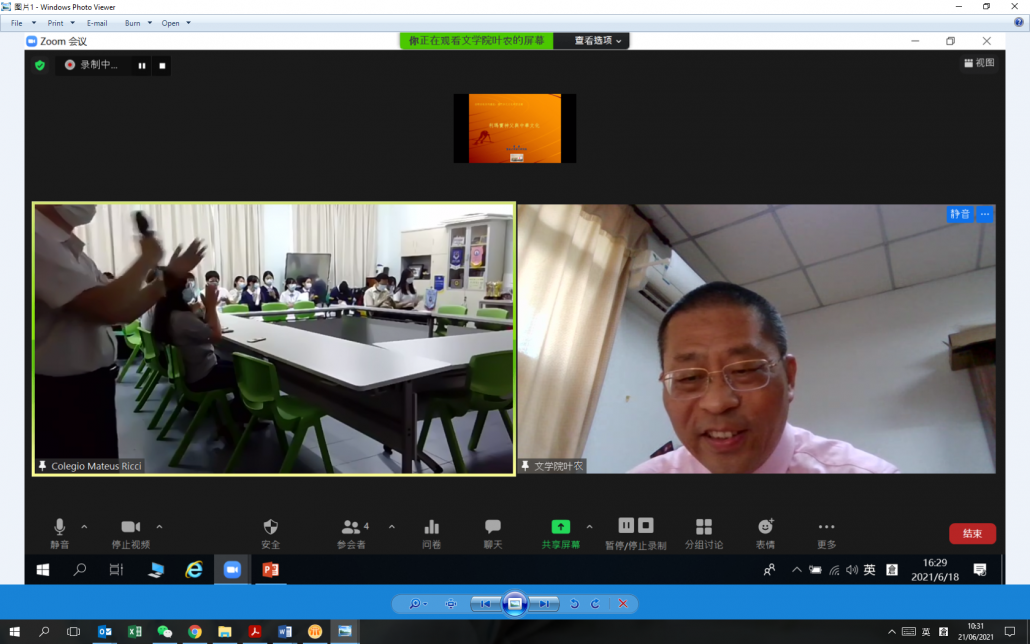 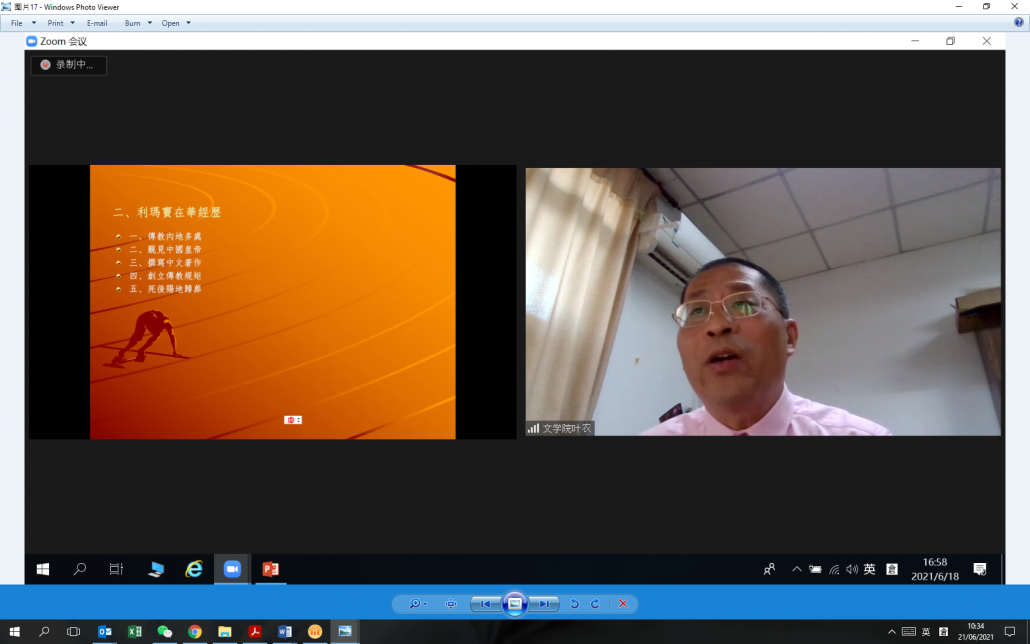 In this lecture, Professor Ye Nong continued the last lecture and discussed the topics of cultural exchange between China and the West, such as Father Matteo Ricci’s missionary journey in China, his history with Macao, and the thoughts in his writings, allowing students to conduct research independently in their spare time. Through the interesting historical events in the Father’s life, the professor pointed out that the Father had made three contributions to the development of Chinese culture: “spreading European knowledge to China”, “introducing Chinese culture to Europe” and “establishing the Matteo Ricci’s Rule”. This allowed students to fully understand the role and influence of priests in the development of Chinese culture. Among them, “Matteo Ricci’s Rules” is a crucial contribution. It is an important way of cultural communication between China and the West, and it also influenced western missionaries to preach in China.

As the leader of the team, Professor Zhu Shoutong, Director of the Centre for Chinese History and Culture, and more than 10 local college students from the University of Macau participated in the “Macau Jiangsu University Students Sunshine Growth 2021 Cultural Camp” from 5th June to 10th June 2021. They visited Nanjing University and the Jiangsu University and inspected various historical and cultural education bases in Nanjing and Zhenjiang. More than 30 leaders and celebrities, including Mr. Wu Hui, the Deputy Director of the Coordination Department of the Liaison Office of the Central Government, Ms. Liang Li, the former Director of Education and Youth Development Bureau of the Special Administrative Region Government, Mr. Cen Zhanping, the President of the Macau Jiangsu Friendship Association, and nearly 50 students from various universities and colleges in Macao participated in this meaningful activity. Mr. Cheong Hok Sam, the Section Head of the Student Resources Section of the University of Macau, also participated in this inspection. 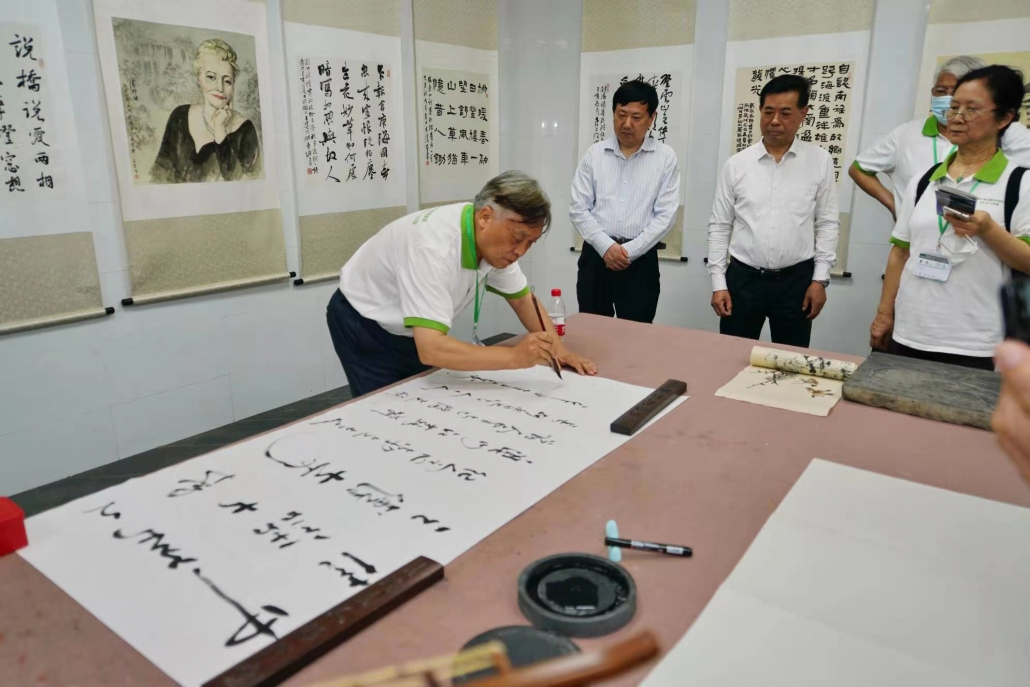 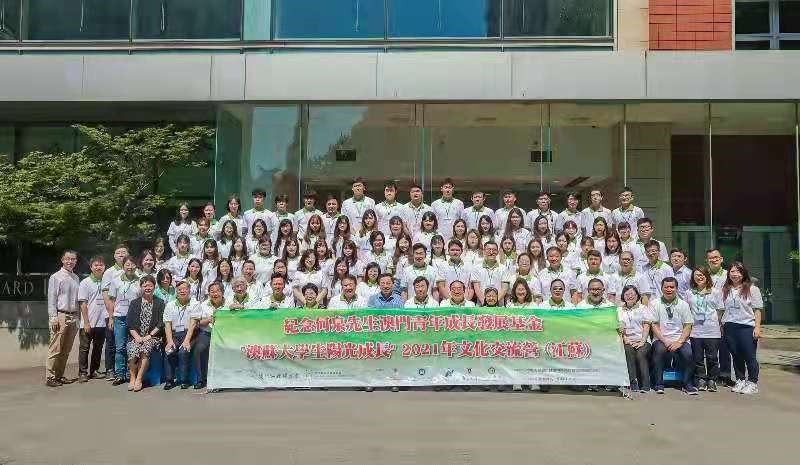 The International Forum on World Civilization and Seminar on Yan Yu’s new book series on civilization is successfully held on 20th April 2021 at União Geral das Associações dos Moradores de Macau. The organizer has invited the author of the books, Prof. Yan Yu, as the key-note speaker of the forum. Prof. Yan Yu is a cultural scholar at Peking University  and is now the Executive Vice President of Southwest Branch of School of Economics, as well as the Director of Office of Domestic Cooperation of School of Economics, Peking University. By this forum, the organizers hope to find the source of “cultural confidence” and tell the Chinese stories well, and actively contribute to building a “community with a shared future for mankind”. 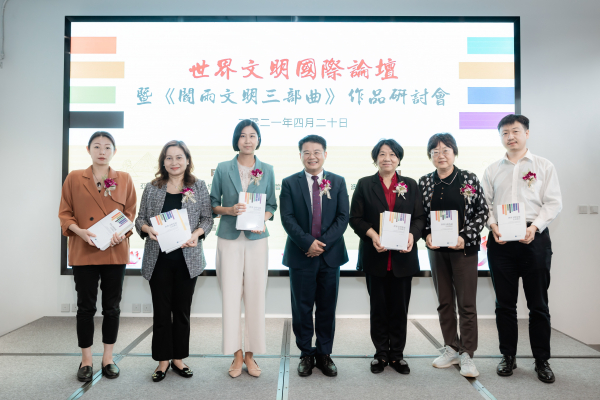 Many distinguished guests were present on the event. The Principal Admin Officer of CCHC Ms Leona Kuan, as the representative of the Centre, attended the seminar. Other distinguished guests  include Mr. Luis Gomes, Director of the Education and Youth Development Bureau of the Macao SAR Government, Ren Chenxin, Deputy Director of the Domestic Cooperation Office of the School of Economics of Peking University, Prof. Jiang Chun, Director of Centre of Sino-Western Cultural Studies of the Macao Polytechnic Institute, and Dr. Loi, Kim Ieng, Vice Dean of the Macau Institute for Tourism Studies. 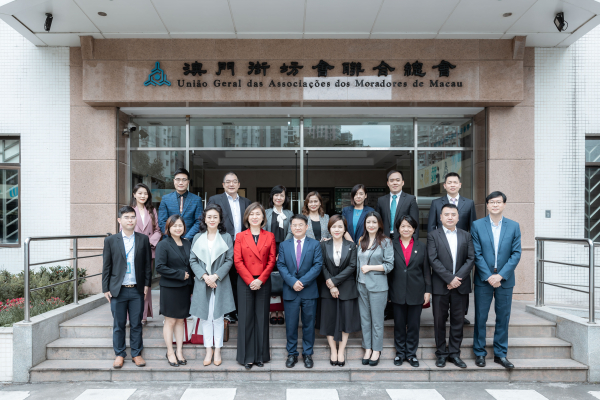 (Photo description) After the seminar, a book donation ceremony was held, and Ms Leona Kuan accepted the book donation on behalf of the Centre.

For more details ,please refer to the Chinese version：澳門大學中國歷史文化中心參與世界文明國際論壇暨《閻雨文明三部曲》作品研討會