Sponsored by Suzhou Municipal Bureau of Culture, Radio, Television and Tourism and Changshu Municipal People’s Government, organized by the Centre for Chinese History and Culture (CCHC) of the University of Macau, the “Patriotism — the Father of Chinese Modern Design Art Pang Xunqin’s Works Exhibition” was opened at the CCHC of the University of Macau (E34 Cultural Building) on December 10, and a Book Presentation Ceremony as well as Ribbon-cutting Ceremony were held at the same time. The exhibition will be displayed for 14 days till December 24th.

Mr. Hui Jianlin, Member of the Standing Committee of the CPC Jiangsu Provincial Committee and Director of the United Front Work Department of the CPC Jiangsu Provincial Committee, Mr. Han Weibing, Secretary of the Party Group and Director of Suzhou Municipal Bureau of Culture, Radio, Television and Tourism, Ms. Ao Ieong U, Secretary for Social Affairs and Culture of the Macao SAR Government, Mr. Song Yonghua, Rector of the University of Macau, Ms. Chen Linda, President of the Macao Association for Chinese Traditional Culture, and other celebrities and student representatives of the Chinese Culture Promotion Ambassador of the University of Macau were invited to attend the opening ceremony. 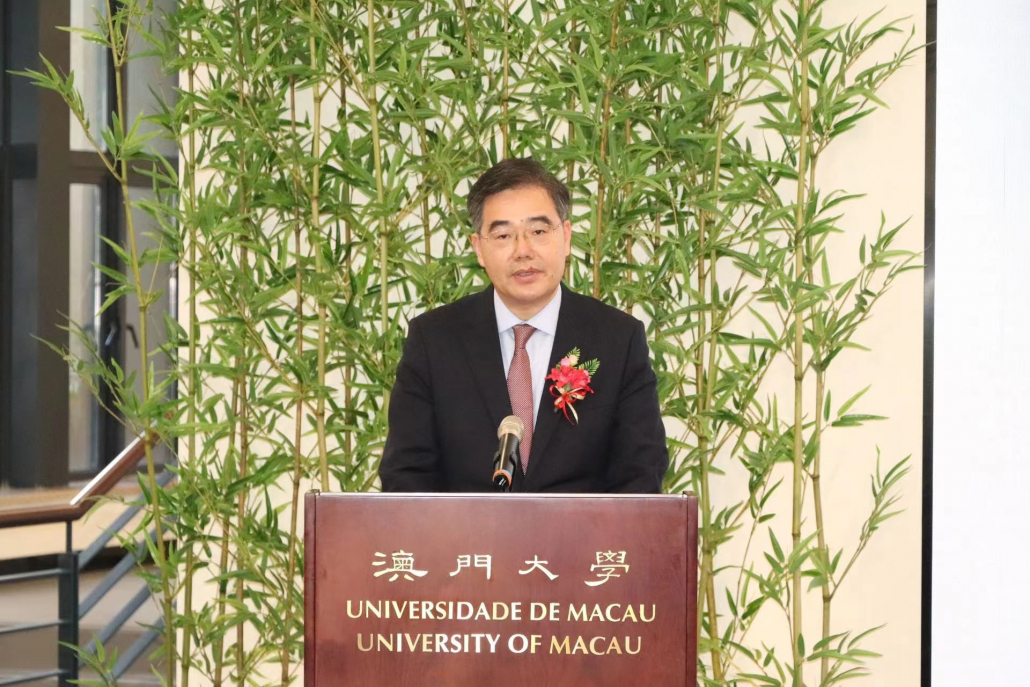 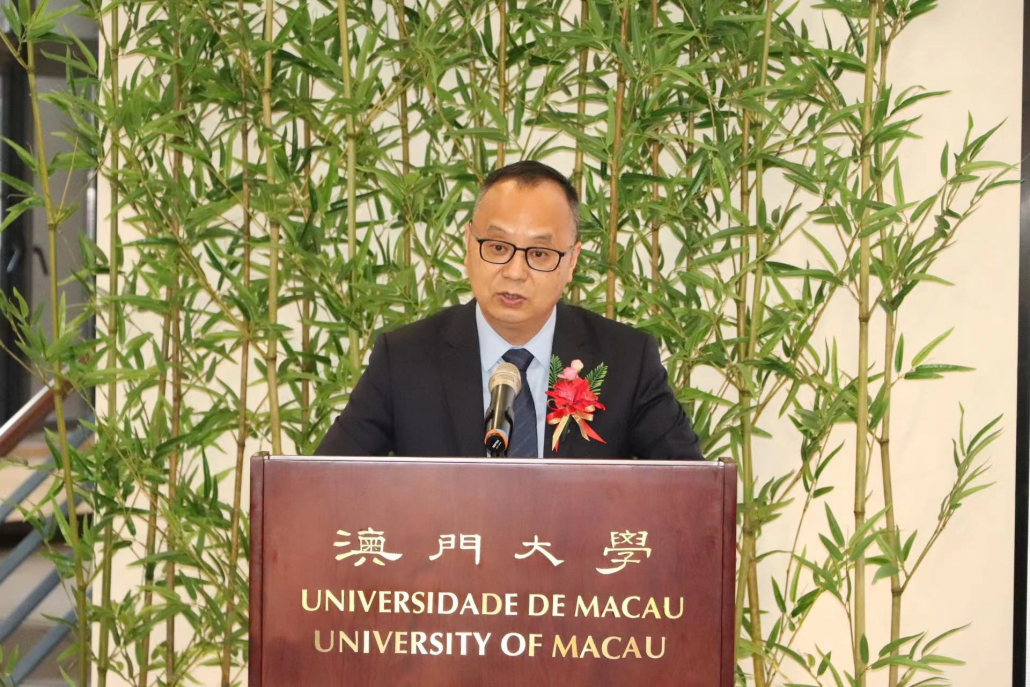 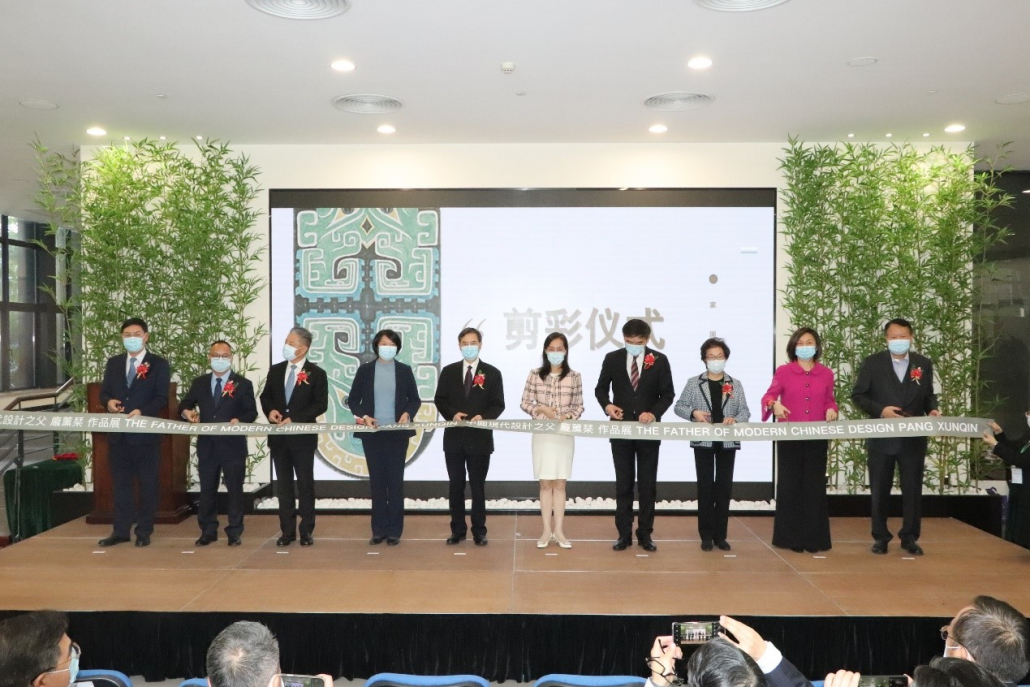 Recently, organized by the Jiangsu Provincial Committee of the Communist Youth League of China and the Yancheng Municipal People’s government and supported by the Centre of Chinese History and Culture of the University of Macau, the ‘Yancheng Yellow Sea Wetland World Natural Heritage into Colleges and Universities’ activity came to the University of Macau. During the two-day exhibition on the 10th and 11th, a new Yancheng Wetland Protection Exhibition was brought to UM teachers and students. The exhibition was held in G007 Exhibition Hall of the UM Library, and the organizer set up exhibits in various forms such as text, photography, visual and audio, which described the process of applying for the world heritage of the Yancheng Yellow Sea Wetland, the wetland ecological protection measures and results. Through multi-sensory and multi-angle experience, the audience have deeply understood the significance of ecological construction. 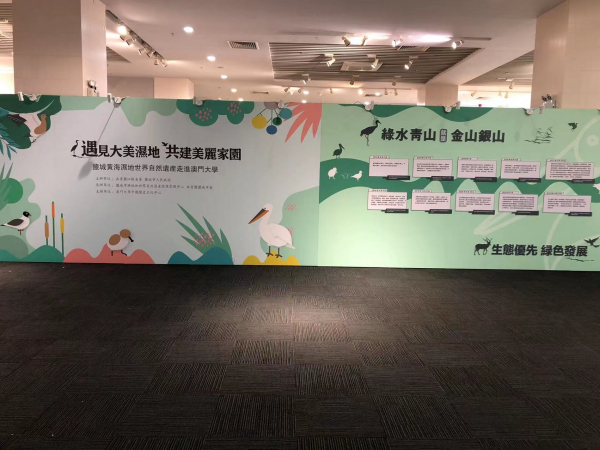 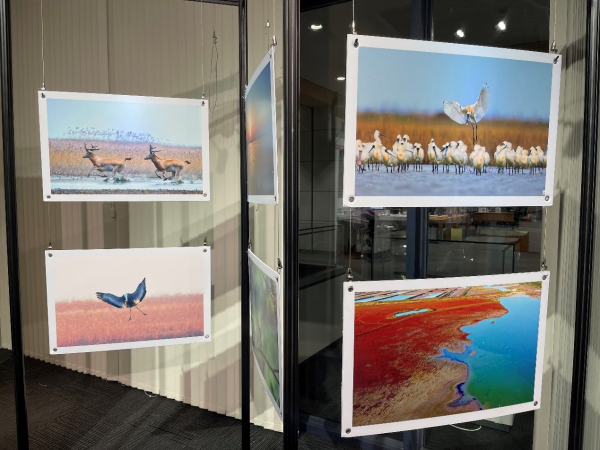 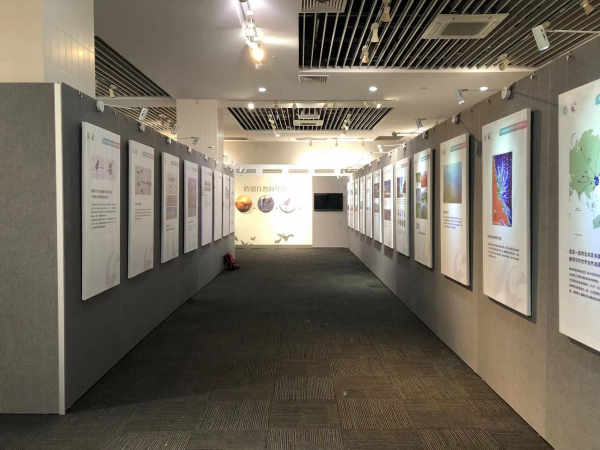 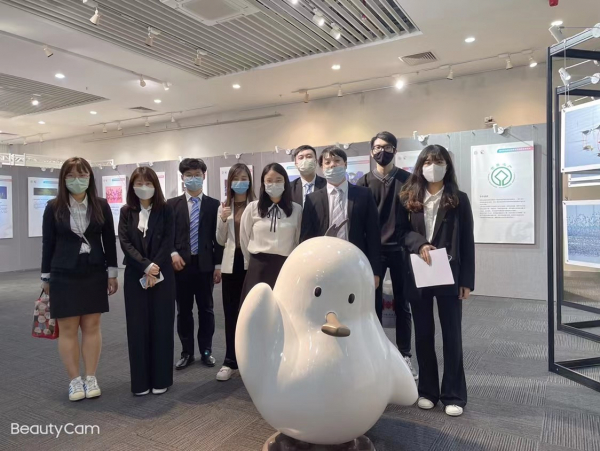 On Dec 11 2021, University of Macau held the Ceremony for the Conferment of Honorary and Higher Degrees 2021. Ao Ieong U, Secretary for Social Affairs and Culture, the representative of Macao SAR chief executive and UM chancellor, and Song Yonghua, Rector of University of Macau, attended the ceremony and gave speeches. 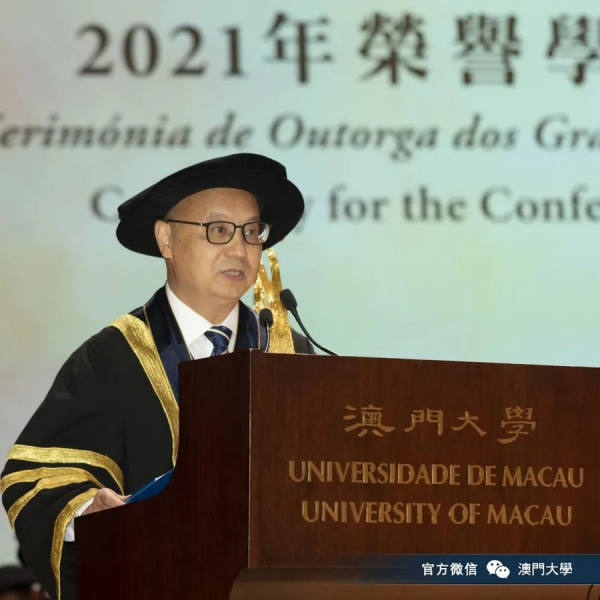 The Master of Arts in Chinese History and Culture program offered by Centre for Chinese History and Culture, University of Macau aims to serve the local high school teachers exclusively, strengthen their skill and foundation for independent studying and excellent teaching of Chinese history and culture, as well as promote via them the affection for and identity with the Chinese civilization among Macao’s youth community. A total of 20 students graduated this year. Professor Zhu Shoutong, the director of the master’s program, and Professor Zheng Dehua, the tutor of the master’s program participated in the presentation ceremony and took a group photo with the graduates. 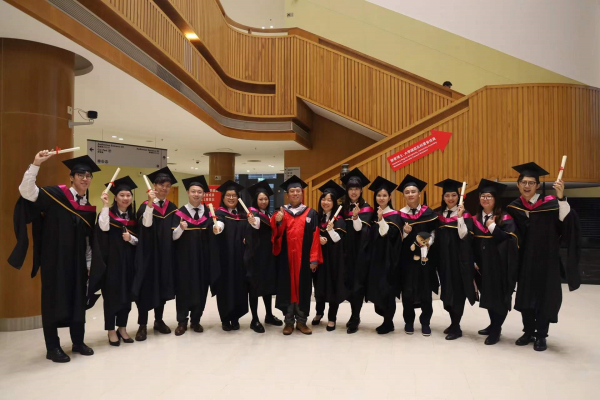 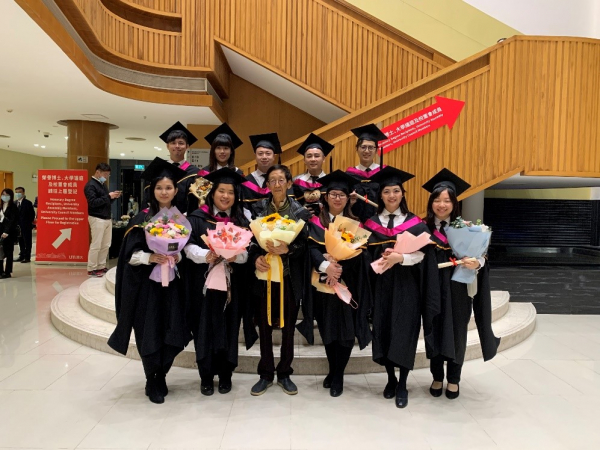 On December 6, 2021, the activity of ‘Chinese spirit – Picture exhibition tour of red ribbon on earth’ was carried out in Macao Kao Yip Middle School. The exhibition tour was jointly organized by the Macao Association of Chinese Traditional Culture, the Centre for Chinese History and Culture (CCHC) of University of Macau, the Macao Youth Federation, the Macao Confucian Association and the Macao Lotus Times. The activity aims to commemorate the 85th anniversary of the victory of the Long March of the Chinese Workers’ and Peasants’ Red Army, to strengthen Macao compatriots, especially the young generation of Macao, to review and understand Chinese history, to carry forward and inherit the great spirit of the Long March, and to enhance Macao teenagers’ sense of belonging and pride of the country. 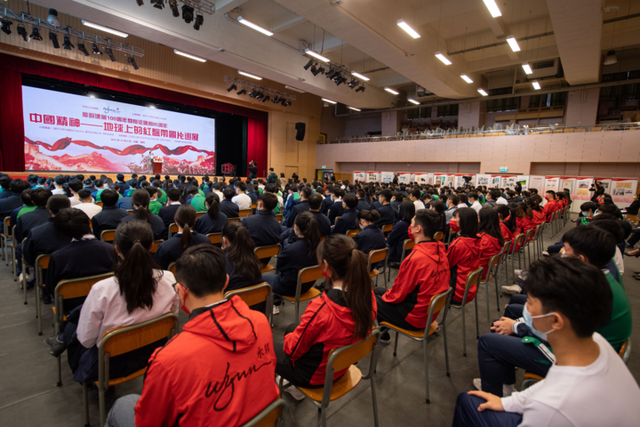 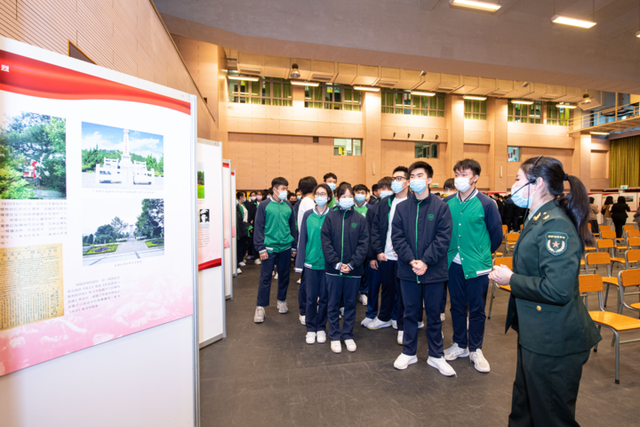 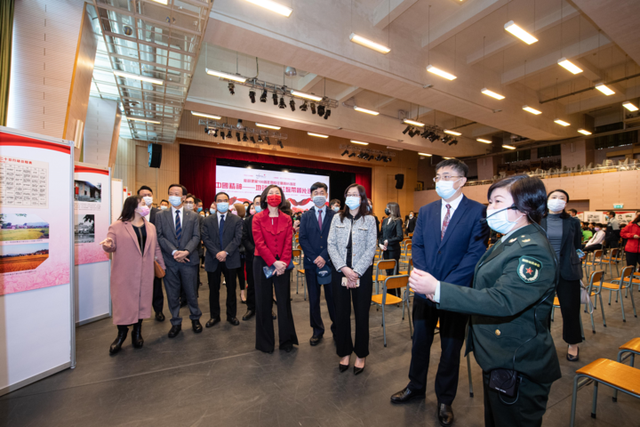 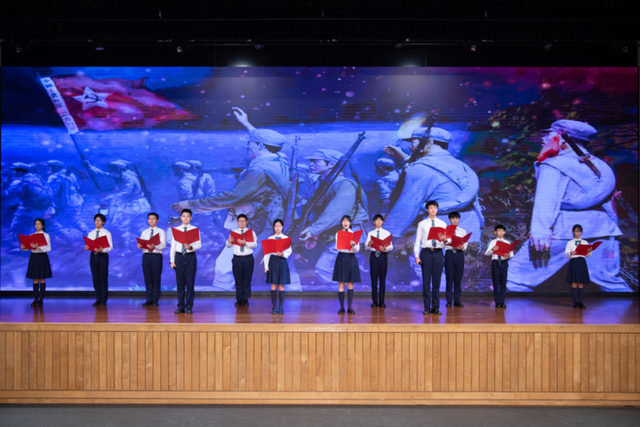 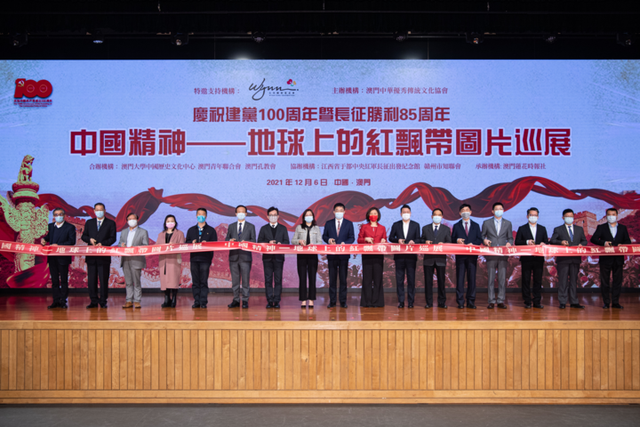 On December 6, 2021, the opening ceremony of the Love the Party with all sincerity—Celebrating the 100th Anniversary of the Founding of the Communist Party of China joint exhibition, sponsored by the Macau Calligraphers Association and co-organized by Centre for Chinese History and Culture, University of Macau was successfully held in Chongwen Building, University of Macau. The exhibition brought together the works of calligraphers from Shenzhen Nanshan, Zhuhai, Hong Kong, and Macao in the Greater Bay Area.

The opening ceremony was brilliant. Guests from four places in the Greater Bay Area were invited to give speeches at the meeting to celebrate the centenary of the party. Afterwards, the guests also visited the calligraphy works on display.

This exhibition is an important measure for Shenzhen, Zhuhai, Hong Kong, and Macao to give full play to the sharing of cultural resources and strengthen the linkage of cultural and urban areas. Macau is geographically close to Shenzhen, Zhuhai, and Hong Kong, and is connected by cultural heritage. In the future, this exhibition will be regarded as a benchmark to further strengthen the calligraphy communication with other three places. 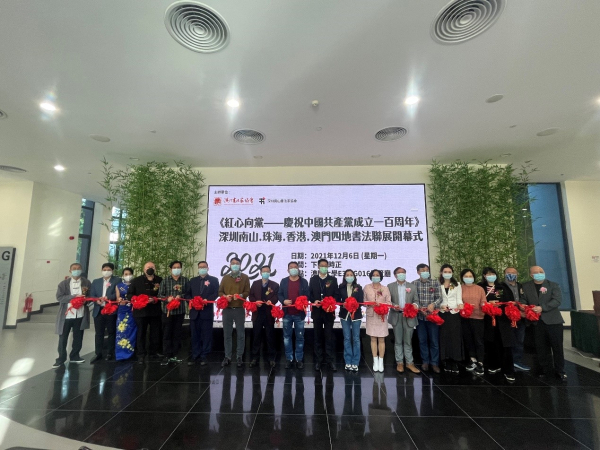 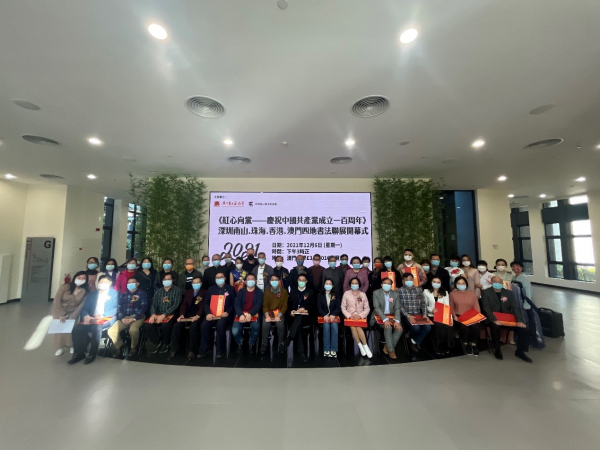 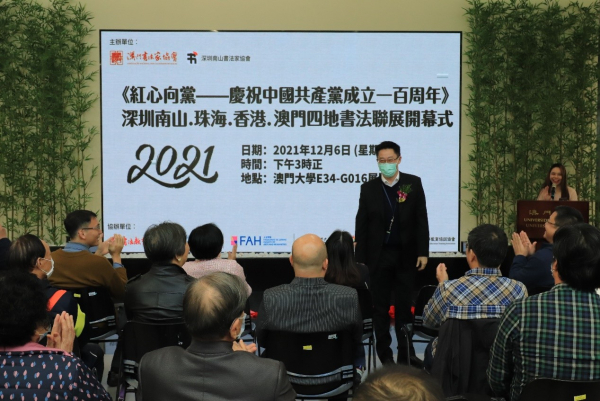 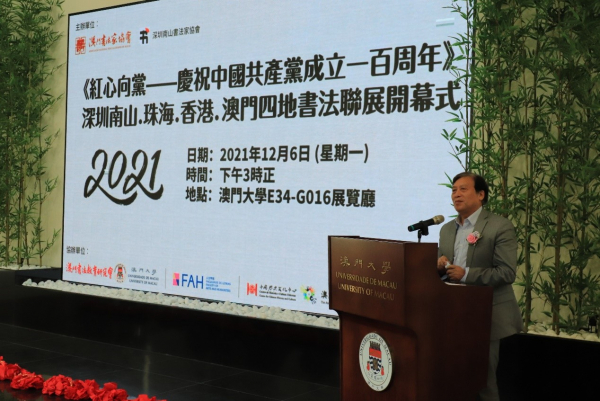 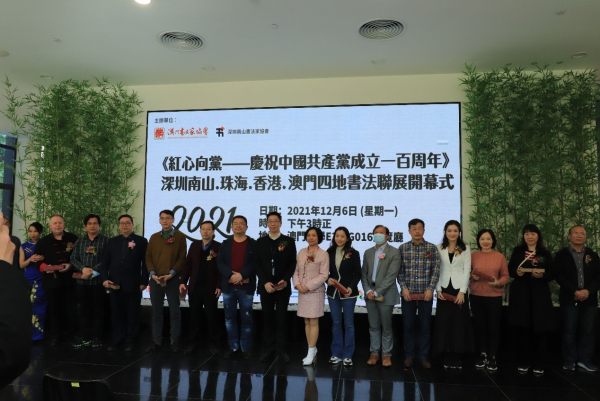 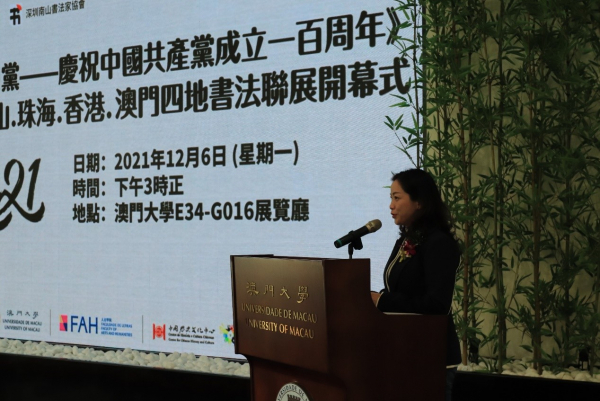 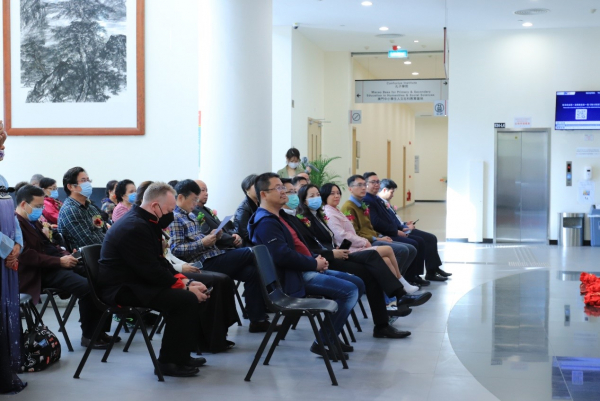 On Dec 2 2021, Series of Academic Exhibition of Special topics in the Special Era: Talking of Children Literature was successfully held in E34 (Chongwen Building). 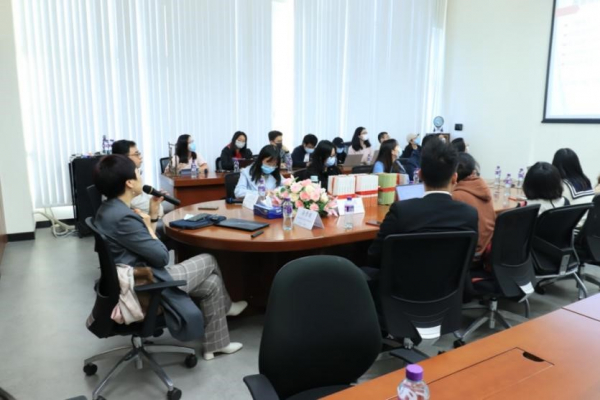 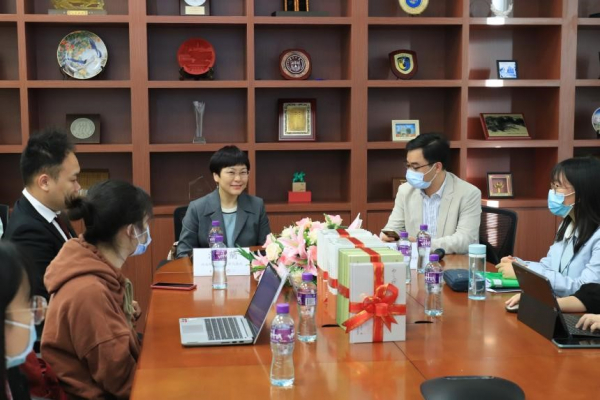 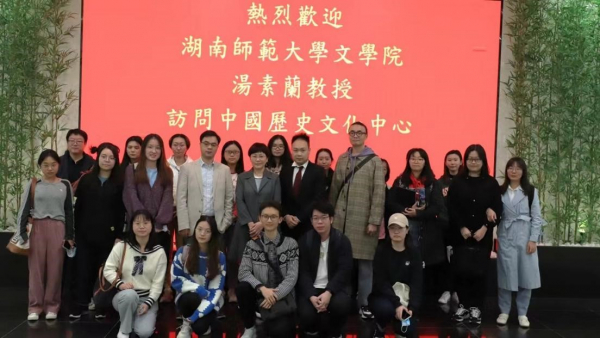 （Dec 6 2021）In order to celebrate the 100th anniversary of the founding of the Communist Party of China, promote young generation’s patriotism and love of Macao, and spread Chinese culture through artistic performances, Melco Crown Entertainment, National Conditions Education Association (Macau) and Centre for Chinese History and Culture, University of Macau cooperated to organize the 2nd Melco Star Macau – Youth Talent Competition. From December 4th to 5th, the preliminary round of the competition went smoothly in the Black Box Theatre of the Faculty of Humanities, University of Macau. Young people from all over Macau showed their great performance on promoting Chinese traditional culture through dance, singing, instrumental music, recitation, drama and martial arts and other programs. 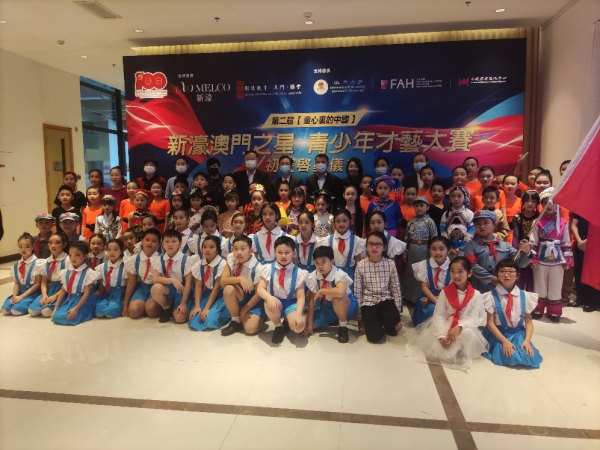 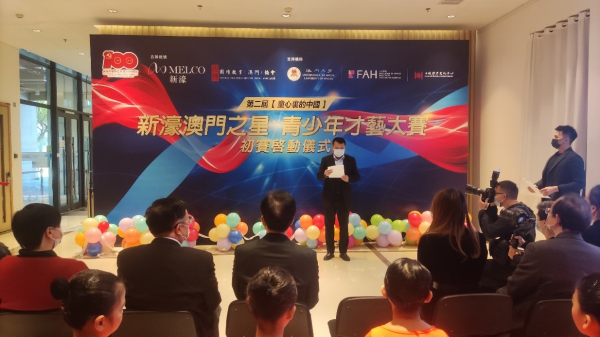 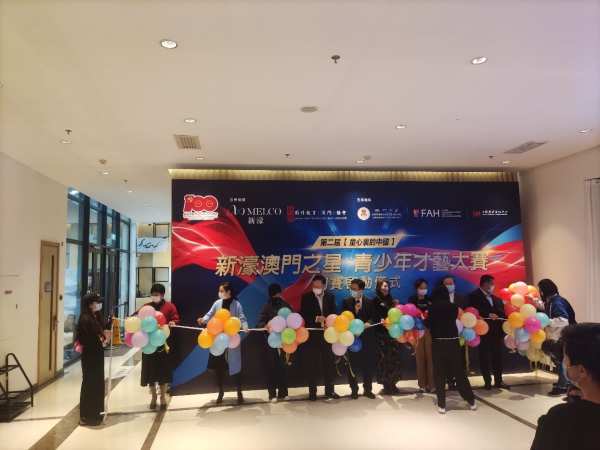