The Yang Yi Academic Thoughts and Method International conference, co-organized by the Department of Chinese Language and Literature, Faculty of Arts and Humanities (FAH), the University of Macau (UM); Research Centre for Humanities in South China, the UM; and the Centre for Chinese History and Culture (CCHC), the UM, was held online (ZOOM) on September 28, 2021, due to the epidemic. The epidemic did not affect the enthusiasm of many well-known professors and scholars from home and also abroad to attend this event, and the conference was held successfully. 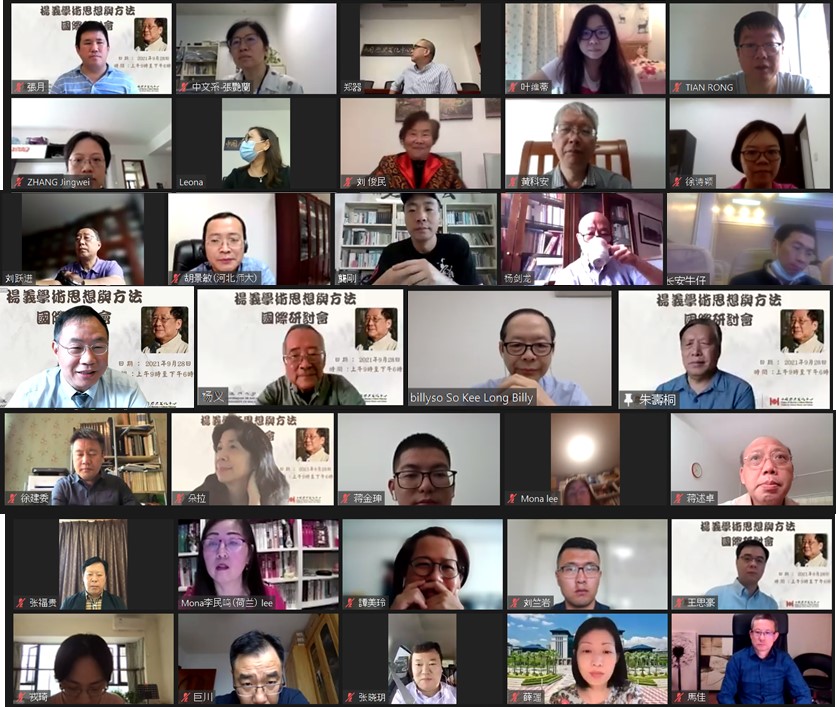 (Guests participate in the online conference)

The conference officially opened at 9:30 on September 28, and was presided over by Professor Xu Jie, dean of the School of Humanities (FAH) of UM. Professor SO Kee Long, vice rector (Student Affairs) of UM; and Professor Liu Yuejin, director of Institute of Literature in Chinese Academy of Social Sciences attended and delivered speeches for the opening ceremony. Professor Liu gave a wonderful introduction to Prof. Yang’s academic ideals and academic devotions. Later, scholars and writers from the United States, Canada, the Netherlands and Australia; as well as Wen Rumin, former dean of Department of Chinese Language and Literature of Peking University; and the president of China World Association for Chinese Literatures also addressed wonderful speeches to the opening ceremony and paid tribute to Prof. Yang for his great devotion to Chinese literature. Finally, Professor Zhu Shoutong, director of CCHC, head of Department of Chinese Language and Literature of UM, and director of Research Centre for Humanities in South China made a wonderful presentation and announced the end of the opening ceremony, and the academic seminar officially began. 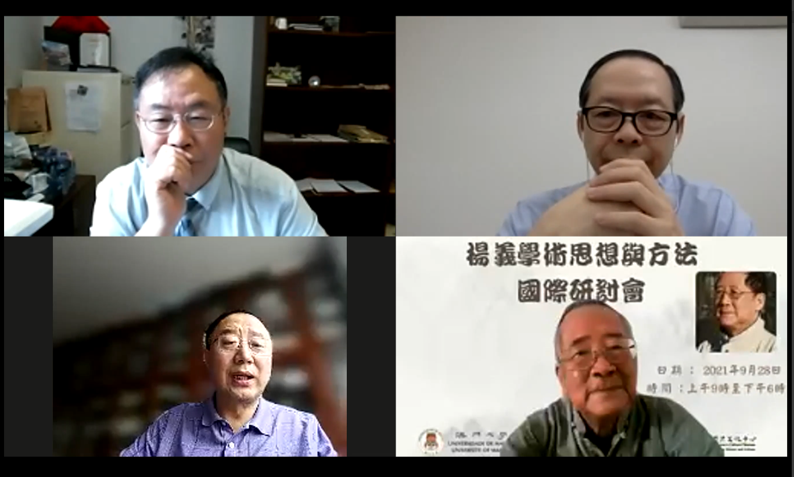 Mr. Tian Weiping, editor-in-chief of South China Quarterly of UM; Dr. Cheang Neng Ian, deputy director of CCHC; Professor Gong Gang, Professor Chen Zhong and Professor Wang Sihao from Department of Chinese Language and Literature, respectively presided over the next five lectures. Well-known scholars from home and abroad separately published academic essays in five sessions, and profoundly shared their research and insights on the academic ideas, academic methods, research approaches and academic achievements of Prof. Yang, as well as the Academic inspiration they had learned from him. Li Jikai, dean of the Institute for Advanced Studies in Humanities and Social Sciences of Shaanxi Normal University; Yang Jianlong, professor from Shanghai Normal University; Prof. Chang Bin, Dean of College of Humanities of Huaqiao University; and Huang Kean, professor of College of Chinese Language and Literature of Fujian Normal University, served as councilors of each session respectively. They made a wonderful comments on these excellent articles and shared their views at the same time. 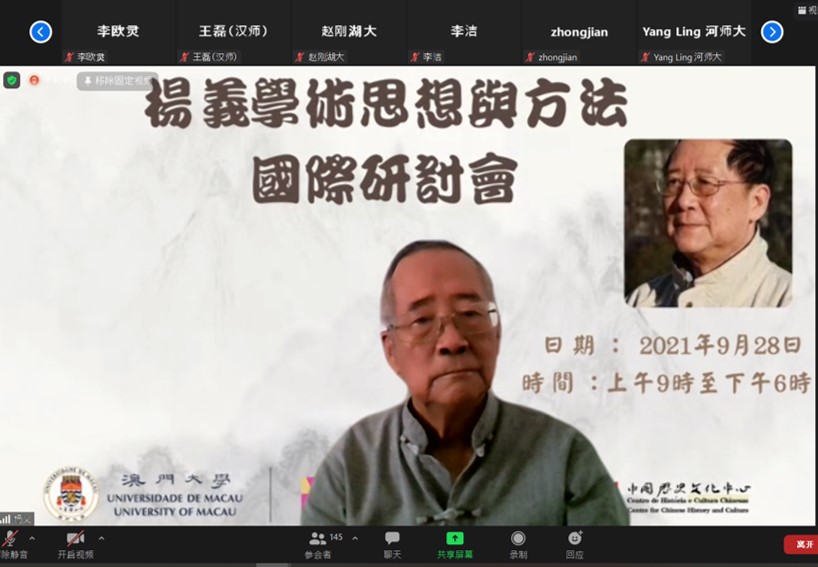 After the academic seminar, Professor Zhu Shoutong immediately presided over the closing ceremony of the conference. Professor Zhu affirmed the success of the conference and invited representatives such as Ms. Dora, a Malaysian Chinese writer; Park Jae woo, Korean Sinologist, to give conclusive speeches. The representatives affirmed the positive significance of this academic exchange conference and the great contribution made by Mr. Yang to the literature. Next, Mr. Yang, member of Chinese Academy of Social Sciences, emeritus professor of Department of Chinese Language and Literature of FAH of UM, addressed a speech. Mr. Yang, who started with modern Chinese literature, had a good command of China and the West in ancient and modern times. His academic ideas and methods, his academic achievements and spirit were worthy of our research and inheritance. In the end, the conference ended in peace and love. 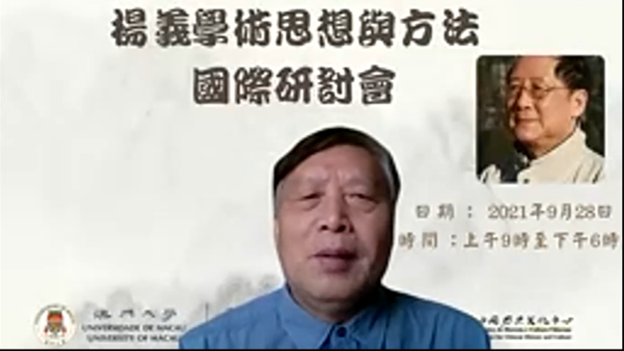 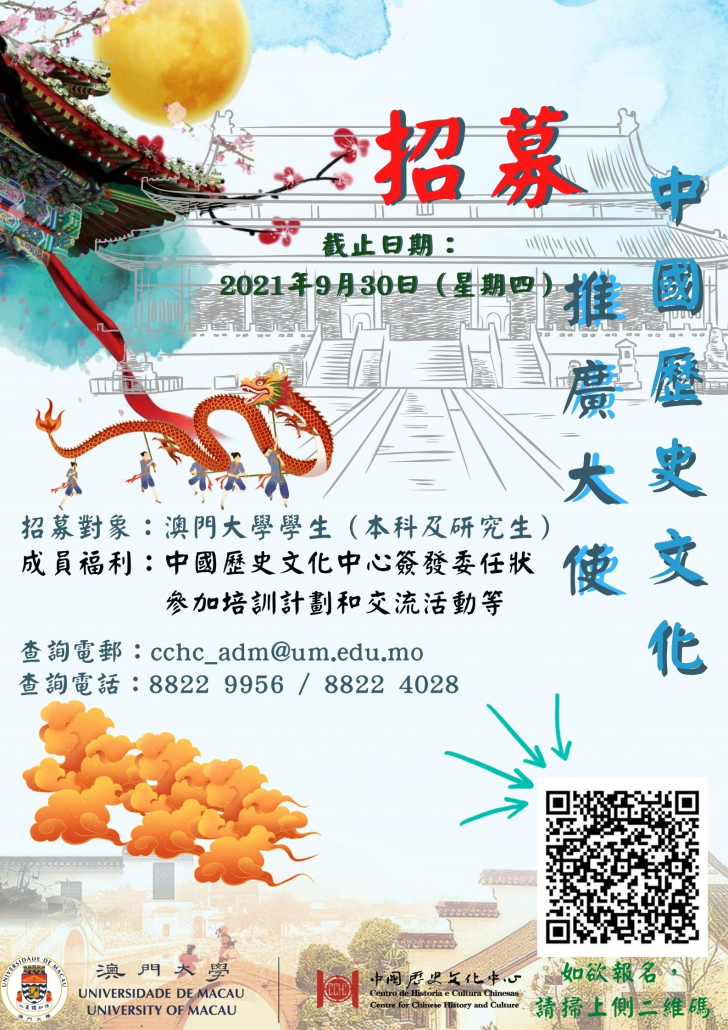 Introduction
To cultivate enthusiasm for Chinese history and culture and enhance the knowledge of excellent Chinese traditional culture, the Centre for Chinese History and Culture (CCHC) at the University of Macau is launching the “Chinese History and Culture Promotion Ambassador” training program. This program includes share meetings, symposiums, lectures, seminars, and exchange programs, striving to make students become the backbone force committed to the dissemination of Chinese history and culture. The term of the Promotion Ambassador is two years and is renewable. The CCHC will also recruit new students at the beginning of each academic year to expand the team of promotion ambassadors.

主辦單位：澳門大學中國歷史文化中心
Organizer: The Centre for Chinese History and Culture, University of Macau

※ 招募對象 Requirements
● 澳門大學的學生(包括本科及研究生)
Students at the University of Macau (including undergraduate and graduate students)
● 對中國歷史文化感興趣
Interested in Chinese history and culture;
● 具有責任感、積極參與、投入度高
Student who are responsible, actively participate, and have a high level of commitment.

※ 成功加入的你將有機會 After joining successfully, you could have the opportunities to:
● 獲得“中國歷史文化推廣大使”委任狀*
Obtain the certificate of ” Chinese History and Culture Promotion Ambassador”;
● 參與中國歷史文化中心舉辦的培訓計劃
Participate in the study organized by the CCHC;
● 參與中國歷史文化中心舉辦交流等活動
Join in exchange and other activities held by the CCHC

According to the story of ’s Xia Shuji, a Chinese anti-Qing martyr in the late Ming Dynasty, from the Xia Wanchun family, the large-scale Huangmei Opera “Talented Women in Troubled Times” was created by Shanghai Junde Culture Communication Co., Ltd. recently. The drama, starring Hu Qian, a renowned performer, was warmly welcomed as the premiere of the Third G60 Nine City Private Theater Performance in the Yangtze River Delta. It is reported that the play will tour in the Shanghai Municipal theater. The Centre for Chinese History and Culture lent warm support to the planning, creation, and performance of this play. Director Zhu Shoutong wrote the title of the opera, which was highly praised by the leaders and experts in Shanghai.

Mr. Lui Che-woo, a famous industrialist and chairman of K. Wah International Holdings, celebrated his 93rd birthday. At the invitation of Mr. Cheng Yusheng, Mr. Lui’s relative, Professor Zhu Shoutong, director of the Centre for Chinese History and Culture, wrote a banner to congratulate the Chinese patriotic business leader Mr. Lui who has a deep love for the region Hong Kong and Macau. Prof. Zhu Shoutong also serves as Head of the Department of Chinese Language and Literature of the University of Macao and the executive vice-chairman of the overseas and Hong Kong, Macao and Taiwan Chinese Calligraphers Association.

Prof. Zhu Shoutong, director of Centre for Chinese History and Culture of University of Macau, paid a visit to Liaison Office of the Central People’s Government in the Macau Special Administrative Region with Macao traditional culture associations to report on conducting a study on Chang Chih-tung and preparing for Chang Chih-tung Memorial Hall. Mr. Yin Rutao, deputy director of Propaganda and Culture Department, and others met them. Mr. Yin and others expressed their gratitude and support to the Macao academic circles for attaching importance to the study on the leader of Westernization movement — Chang Chih-tung. Prof. Zhu Shoutong pointed out that Macao was an important window and bridge for China’s modernization, and the most important statesmen promoting China’s modernization, such as Sun Yat-sen, Lin Zexu, and Chang Chih-tung, all had close relationships with Macao. There were already Sun Yat-sen Memorial Hall and Lin Zexu Memorial Hall. But there was only one statue of Chang Chih-tung in Temple of City God. As a result, the Macao intellectual and cultural circles knew very little about the relationship between Chang Chih-tung and Macau. To this end, the Centre for Chinese History and Culture jointly put forward the above proposal with the traditional culture associations such as the Macao Chinese Culture and Art Exchange and Appreciation Association. During the meeting, Mr. Yin also fully affirmed the work of Centre for Chinese History and Culture.