On 28 September 2022 (Wed), under the warm reception of Cheang Neng Ian, Deputy Director of Centre for Chinese History and Culture of the University of Macau, and other administrative staff, Principal Ieong Chan Kei and nine teachers from Tong Nam School visited CCHC to see the exhibition “Youth and War Flames – Young Figures of the New Fourth Army”.
During the course of the exhibition, Principal Ieong pointed out that the New Fourth Army’s fearless attitude towards sacrifice was worthy of praise by teachers and students and hoped that the teaching team could continue its immortal spirit through action. Through the exhibition, teachers can learn that the New Fourth Army not only made significant military contributions, but also made significant cultural, economic and medical contributions, making it a learning opportunity not to be missed.

Cheang Neng Ian, Deputy Director of the Centre, suggested that schools could bring the exhibition of the New Fourth Army to their campuses to enhance patriotic education, raise the sense of national identity and pride among Macao’s youth, and nurture a new generation of patriots who love Macao. 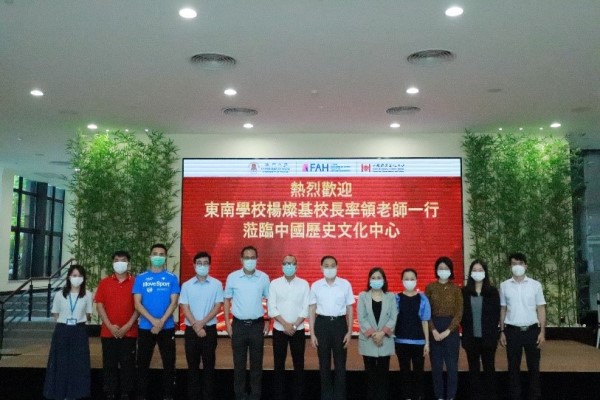 “Ye Ting and Macao” Seminar, jointly organized by Yancheng Culture Radio Film and TV and Tourism Administration, New Fourth Army Memorial Hall and CCHC. It was held at CCHC on the morning of 21 September, 2022.

Ye Ting was one of the main leaders of the New Fourth Army. He commanded the Nanchang Uprising and served as the commander-in-chief of the former enemy. He was the commander-in-chief of the Workers’ and Peasants’ Red Army when he participated in the Guangzhou Uprising, and served as the commander of the New Fourth Army during the Anti-Japanese War. As the founder of the Chinese People’s Liberation Army and an important leader of the New Fourth Army, Ye Ting experienced many ups and downs in his life. He became famous as a young man and wrote a legend of the Northern Expedition and the anti-Japanese war. He experienced overseas exile and five years of imprisonment, and his song “Song for the Prisoner” became a reflection of his steadfast revolutionary spirit.

Ye Ting and his family had a close relationship with Macao. The former residence of General Ye Ting, located at No. 76, R. do Alm. Costa Cabral, was the residence of Ye Ting’s family in Macao from 1932 to 1942. Seven of his nine children were born here and spent most of their childhood here. Since 2012, the Macao government has been restoring the former residence of Ye Ting. On May 28, 2014, the “General Ye Ting’s Former Residence” was officially opened to the public. Since then, the “General Ye Ting’s Former Residence” has become an important historical and cultural attraction in Macao.

In the online speech, Ms. Ye Lin, granddaughter of General Ye Ting, said that her grandfather had a deep affection for Macao throughout his life, and that her grandmother had brought several children to live in Macao for a long period of time when her grandfather joined the revolution. It was only after the outbreak of the New Forth Army Incident and the imprisonment of her grandfather by the Kuomintang that her grandmother left Macau with her family. Her father, Mr. Ye Zhingda, returned to Macao in 1993 after a long absence of 50 years, as the communication and airport construction in Macao was in its initial stage. Ms. Ye Lian expressed her gratitude to the organizer of the seminar on “Ye Ting and Macao”, and wished the event a great success.

The seminar was chaired by Professor Zhu Shoutong, Director of CCHC, and a number of experts and scholars conducted a broad and in-depth academic exchange on the patriotic spirit and indomitable revolutionary spirit of General Ye Ting, as well as his legendary life. The organizer hoped that through the academic seminar jointly organized by Suzhou and Macao, the historical and humanistic materials of Macao represented by General Ye Ting will be explored in depth, further enriching the connotation of Macao’s historical literature and contributing to the construction of Macao as a base for exchange and cooperation with Chinese culture as the mainstream and the coexistence of multiple cultures.

After the seminar, guests were invited to visit the exhibition “Youth and War Flames – Young Figures of the New Fourth Army” which will be launched on 22 September. 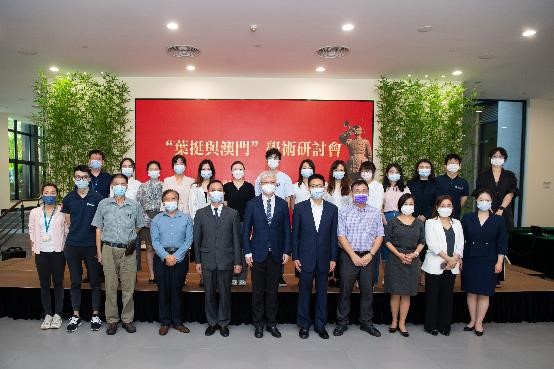 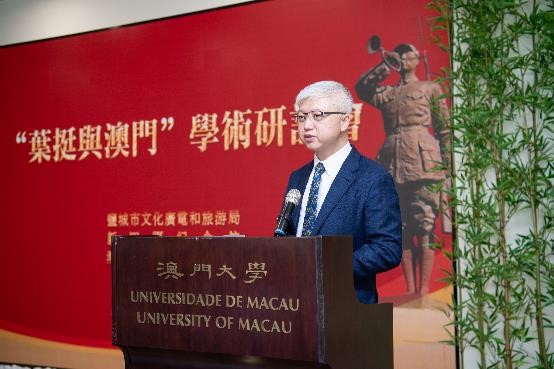 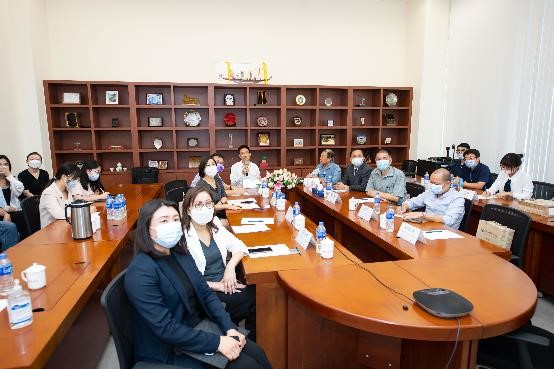 This year marks the 100th anniversary of the founding of the Communist Youth League of China. The exhibition captures 54 representative New Fourth Army youth deeds. The original intention and mission of the Chinese Communists and young soldiers of the New Fourth Army are explained intensively. The aims are to enable Macao youth to understand the history of the suffering of the motherland and the history of struggle since modern times, to feel the firm faith and spirit of the Chinese Communist Party of leading the entire nation’s compatriots to save the country, rejuvenate the country, and strengthen the country, to effectively promote the identity of adolescents with the State and the nation, to gather more patriotic forces and to strengthen patriotic education. 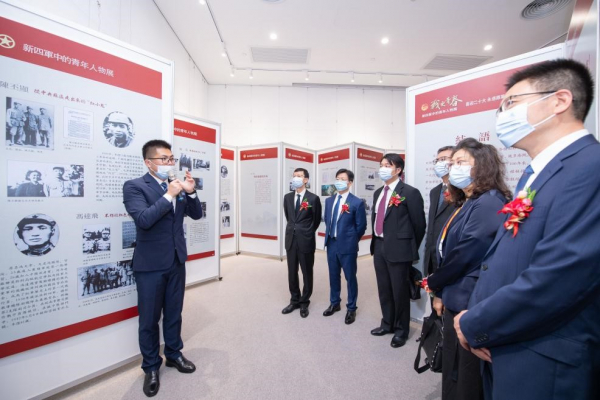 In the speech of, Li Weihua, Deputy Minister of the United Front Work Department of the Jiangsu Provincial Party Committee and Vice President of Jiangsu Overseas Association, said, In modern times, outstanding children such as Zhou Enlai, Qu Qiubai, Zhang Wentian, Yun Daiying, Zhang Tailei and Qin Bangxian had emerged in Jiangsu. Thousands of revolutionary martyrs fought and sacrificed on the land of Jiangsu in order to resist aggression for people’s liberation and the country’s rebirth. The “Iron Army Spirit” of the New Fourth Army, cast in blood, is one of the bright undertones of Jiangsu’s local culture, which is a valuable cultural asset in Chinese civilization history. 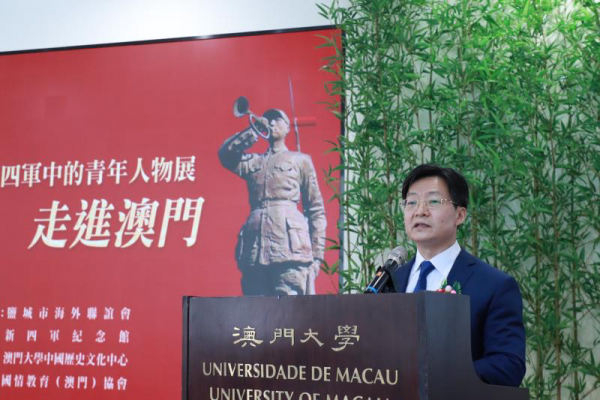 Zhu Shoutong, Director of the Centre for Chinese History and Culture at the University of Macau, believes that the smooth running of the exhibition shows that the epidemic is on its way out, that Covid-19 will surely fall and that normal order will return to our lives. Zhu also highlighted the relationship between the leaders of the New Fourth Army and Macao, showing that Macao is a city to be proud of since it has not been absent from an important part of modern Chinese revolutionary history. 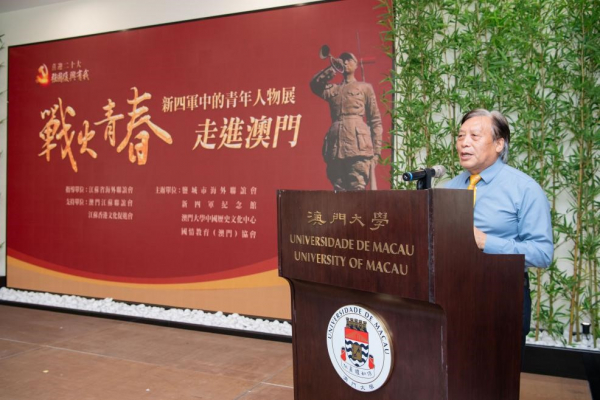 Speaking as a representative of the students, Yang Wenpei of the University of Macau said that when she visited the exhibition, she felt the state spirit of the New Fourth Army. Home is the smallest country, and the country is a thousand families. The historical stories behind the pictures are imbued with a strong sense of family and nationality and vividly convey a nation’s rich heritage. 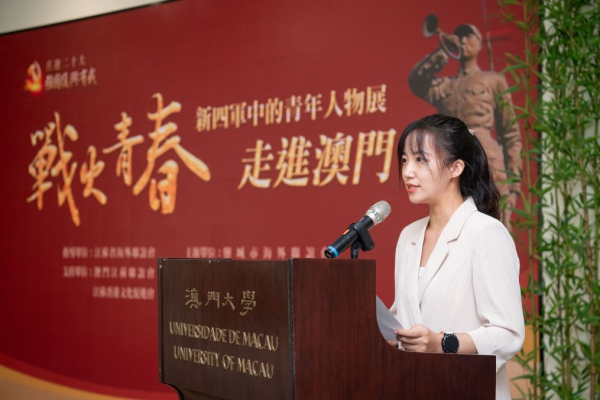 On behalf of St. Joseph Parish Secondary School No. 5, Principal Wong Kin Man introduced the school’s past efforts in promoting Chinese culture, and hoped that after becoming a promotion base in the future, the school could go to the next level and actively face the community and expand external cooperation and exchange. Mr. Lim also pointed out that St. Joseph Parish Secondary School No. 5 attaches great importance to history education, and the school’s “Love My China” Mainland study tour has been well received by students for many years.

Director of CCHC Zhu Shoutong said that the Base for the Promotion of Chinese History and Culture is an important project established by the Macao Base for Primary & Secondary Education in Humanities & Social Sciences and the CCHC, which is an important practice in the construction and promotion of Chinese culture. The aim is to implement the high-end positioning of “Chinese Culture as the Mainstream, Multicultural Coexistence Exchange” and to establish a model for promoting Chinese culture in primary and secondary schools in Macao.
The project aims to strengthen the cooperation with Macao primary and secondary schools, deepen Macao youth’s knowledge and understanding of Chinese history and culture, enhance their sense of national identity, and encourage them to pass on their outstanding traditional culture, so as to better promote the spread and development of Chinese culture in Macao.

At present, ten Chinese History and Culture Promotion Bases have been established, including Pui Ching Middle School, Escola Estrela do Mar, Baptist College, Escola Choi Nong Chi Tai, Colégio Mateus Ricci, The Affiliated School of the University of Macau, Lou Hau High School, Escola Xin Hua, Tong Nam School, and the latest addition, St. Joseph Parish Secondary School No. 5, completing the task of establishing ten promotion bases in five years ahead of schedule. The promotion bases have achieved fruitful results and accumulated valuable experience in the implementation of the Master Teacher and School Seminar Program, the Historical and Cultural Heritage Study Tour Program and the Special Project Construction Program. Zhu pointed out that the plan has proved to be feasible to build the promotion centres in a steady and effective manner. 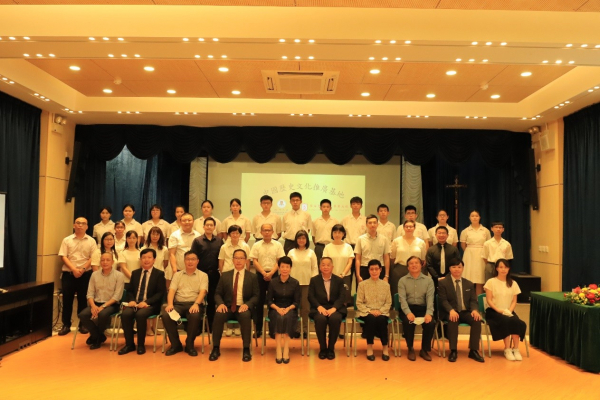 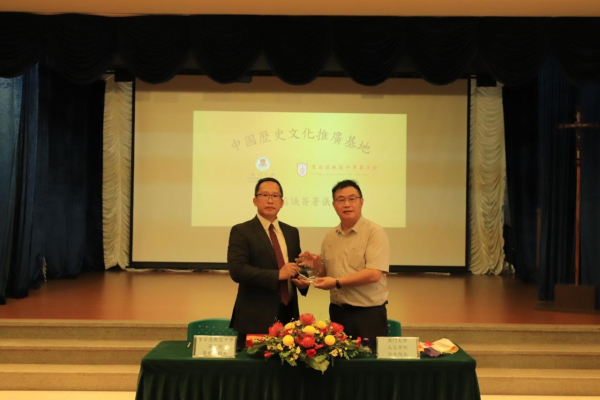 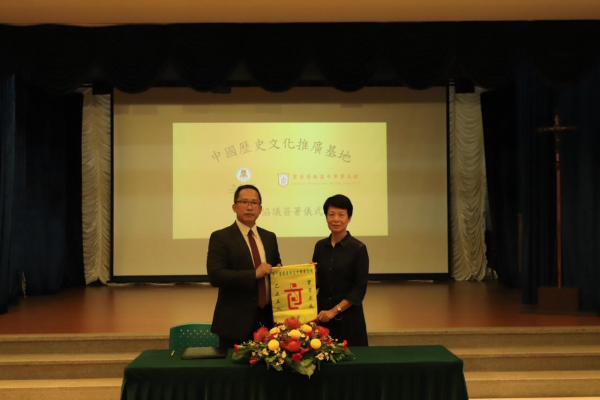 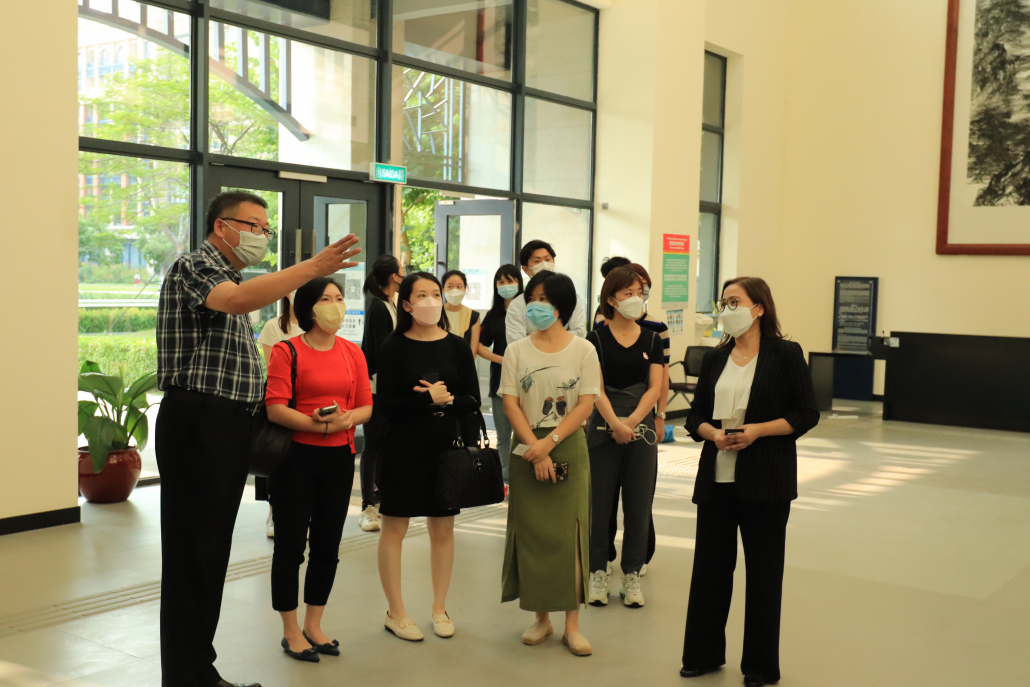 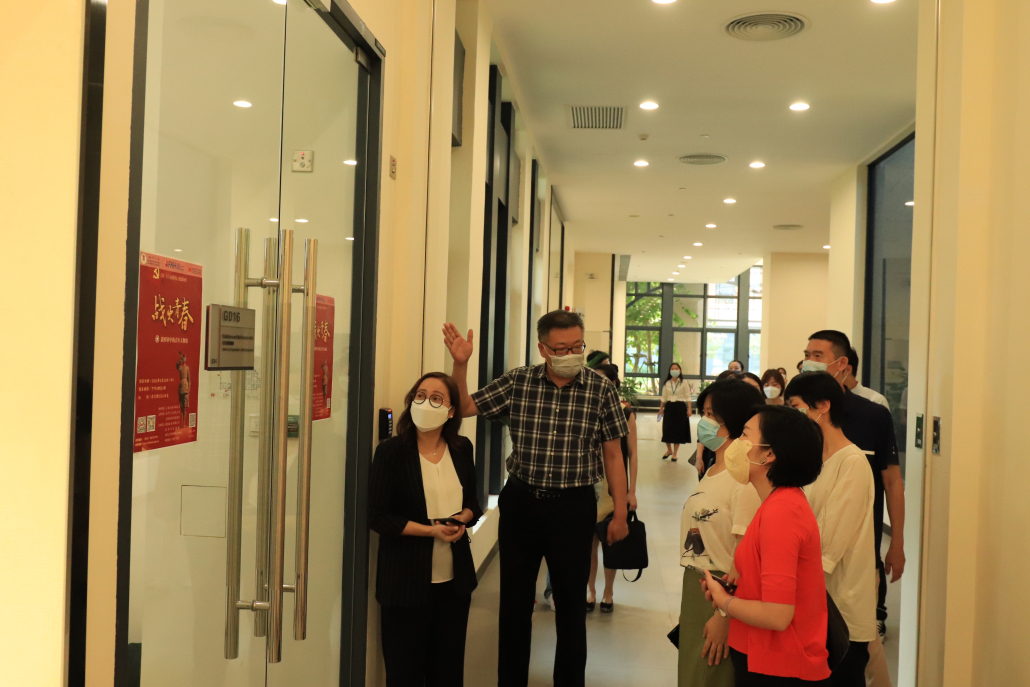 The delegation was warmly received by Professor Sio Chio Leong, Director of Academic Affairs Department of CCHC, Kuan Sio In, Principal Administrative Officer, and Professor Chen Zhong, Deputy Director of the Confucius Institute, who led them to visit Cultural Building and introduced them to the basic information of the Base, CCHC and the Confucius Institute in Cultural Building. 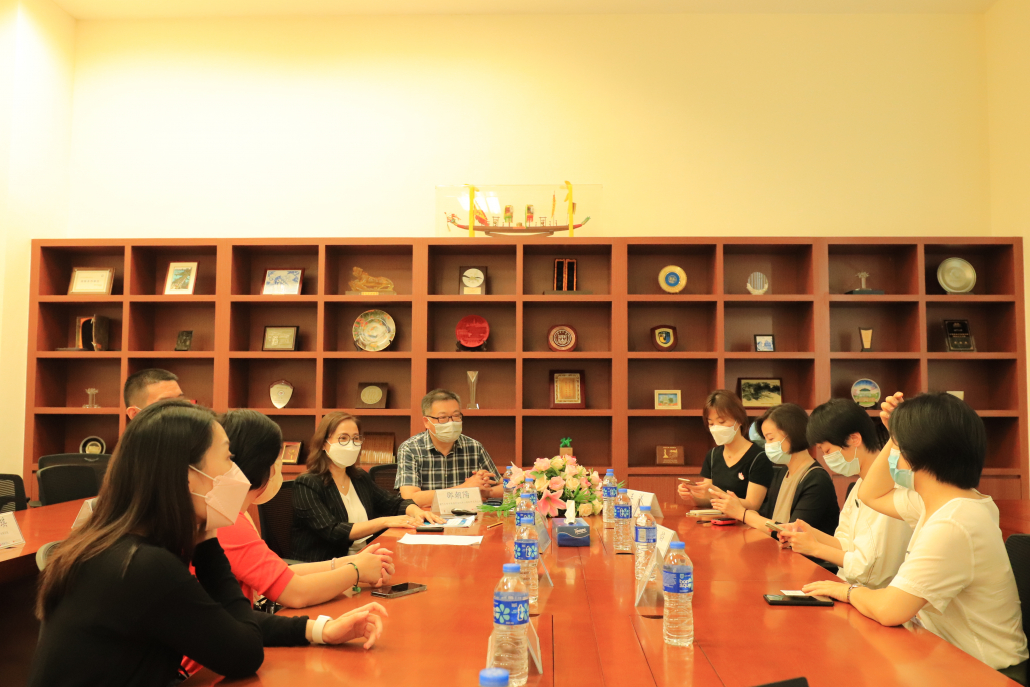 During the interactive conversation, Prof. Sio Chio Leong pointed out that the interaction between mainland China and Macao universities should be strengthened, hoping to form a platform for mainland students to study in Macao and develop the awareness of study tour industry. Associate Researcher Zhang Yang agreed and hoped to strengthen the exchange and cooperation in the future. 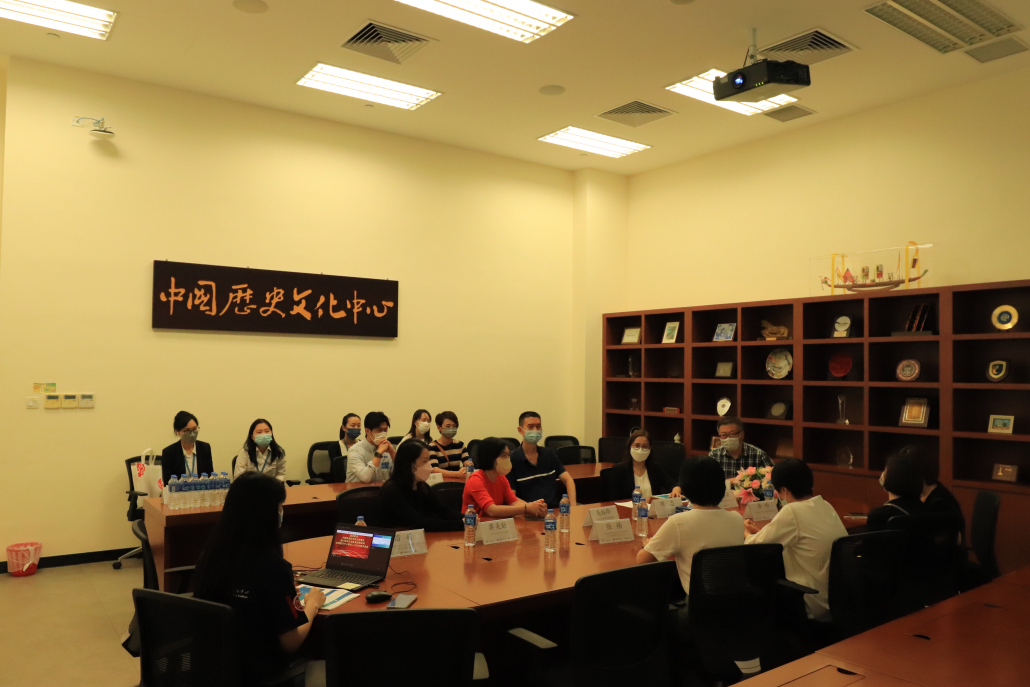 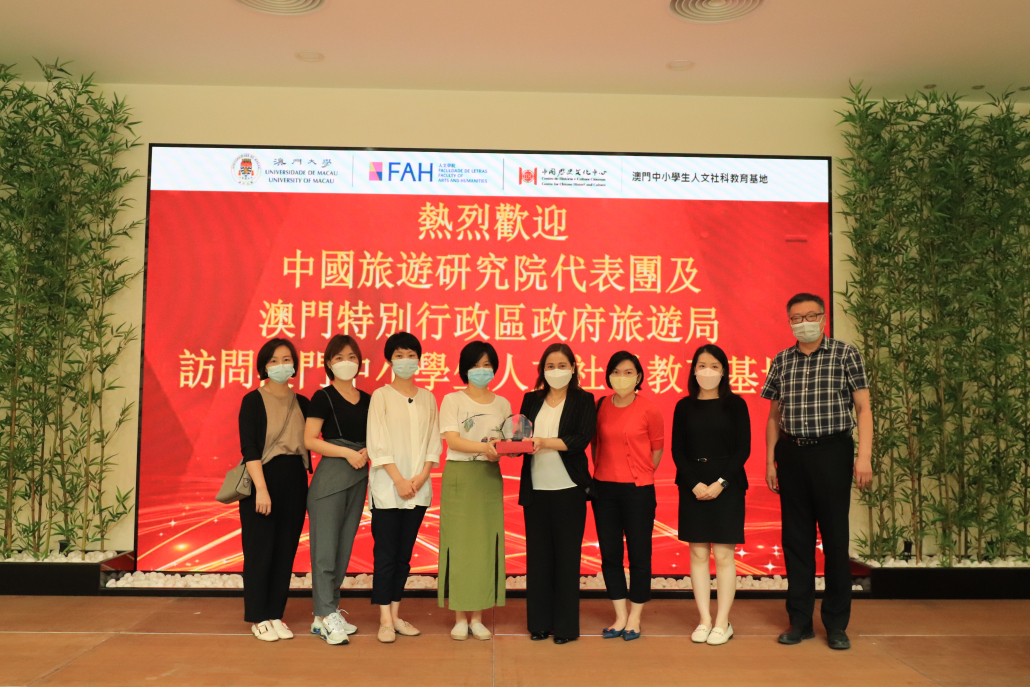